In the fall of 2009 I had a pleasant visit to San Francisco after attending a wedding in northern California. I had never visited the city before, and I specifically wanted to take a look at some of the many murals there. I will do another post about the other murals in S.F., but here I want to talk about Mona Caron, one of my favorite mural painters.

Firstly, for me personally, it was really inspiring when I saw her  mural creations how much  thought and  attention to detail she  puts into her public art. You can really feel the passion and pure hard work she has lavished on them. Her murals are often about the local social history and feature a vision of a “do it yourself utopian future.” She often shows how communities can transform themselves into better places. Her particular focus is on suggesting that public space should also be a social and convivial space as opposed to an area intended just for shopping and traffic.

I support her vision, which seems to involve a lot of bicycles, public transportation and social justice. She often uses ribbons or streams to represent time or change and  to carry her narrative forward.

Also apparent  is her  frequent use of a a slight bird’s eye to great advantage to pack narrative in. Likewise, she regularly includes little points of humor in her murals, which really add to the viewing experience.These playful elements might be a little elephant walking around, or a jibe at a corporate practice. Caron says that these small elements are conceived to encourage and reward passerbies for slowing down. To create that space for socializing that she desires to see in our collective future.

Ms.Caron says that often the act of creating a mural begins to form that community she is trying to encourage. People stop by and talk with her, contributing feedback and ideas, and really participating in the process. In her Tenderloin mural especially she often added the locals to the mural, letting them choose where they preferred to be. In my personal experience I have also found that when I have created murals, people absolutely are thrilled that I am there. It’s the process that makes it a wonderful experience.

Tangentially, that is something  that I too have noticed and enjoy while landscape painting, especially in an urban setting. That interaction with people  makes it  more fun and meaningful. I spoke briefly with Ms.Caron while she was working on her Tenderloin neighborhood mural. She seemed pleasant, charismatic, and happy to talk. I wish I had stayed longer!

Ms. Caron, who is from the Italian language canton of Tocino in Switzerland, came to San Francisco in 1992 and studied (and later taught) art and illustration there. After school, she was involved in illustration work, and did her first mural in 1998 on the side of a Safeway Grocery store in  San Francisco. It is a bicycle themed mural, and I especially enjoyed that because  I had rented a bike for my visit there, and I in fact rode to many of the areas depicted in the mural. If possible I always use a bicycle when visiting a new place because I love the pace and intimacy that it provides. 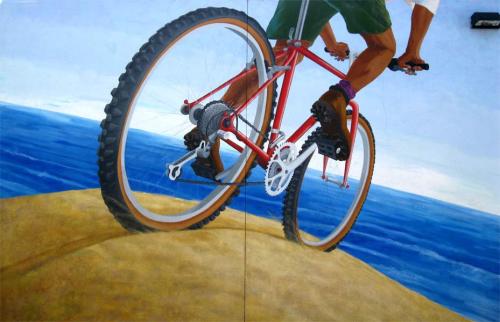 Click here for an image of  the full Bikeway mural.

Ms. Caron seems to often have a progressive political viewpoint with her her murals. One interesting political mural she  created was “La Lucha Por El Agua Continúa” – a mural in Cochabamba, Bolivia, about the water issues there and resistance to the privatization of water supplies. This was a commemorative mural, celebrating a moment of political action in a community. Caron’s  true gift seems to me to be to be able to fuse political thought with aesthetic quality within her murals.

Of course she is doing this mostly in San Francisco where most viewers probably share her politics. I think the real trick for other progressive muralists to ponder is communicating these ideas in areas where such viewpoints might not be so welcome.

Click here for more information and photos about this mural

Caron has a community approach to her work, meeting and planning with locals and garnering and using feedback from neighborhood passerbies on the street. Her murals often deal with social history. In her “Market Street Railroad  Mural”, she has shown the history  as well as a utopian future of Market street.

The mural is divided into historical  parts, which  also change color. Again here we see a slight birds eye view and also a spatial  bubble distortion in the interest of packing narrative in.  In this work, Ms. Caron has so much going on that I’m reminded of a convention in  many renaissance paintings, where every usable space was filled. On the far right we see the “Utopian future” section of the mural where she has shown the possibility of the area changing into a more socially  friendly environment. In a lecture Caron talks about using these  past/future juxtapositions as “an argument for radical change in the future.”

The Market St. mural is  located on a nondescript wall  on a slightly seedy section of Market Street. I almost missed it.  But it goes to show Ms. Caron’s hypothesis (expressed in a quote below) that by her act of giving so much attention and time  to a spot, that locals come to perceive  that spot differently.

For a bigger picture and explanation of the market Street mural, click here.

As far as her process goes I don’t have much information. The media is acrylic. I have seen some  early images and it appears that Caron starts of with line drawings which she later paints in. I get the feeling that there is a basic ( perhaps comprehensive) design, but that it may change as the process continues. As far as funding goes, it seems that Caron often works with a client organization that applies for grants to fund the process. Often the city of San Francisco is the patron, taking the funds from a voluntary business tax for city beautification.

I’ll let Ms. Caron’s own words finish this post. This is from “An Interview with Mona Caron, Muralist in San Francisco” by Franco Folini on the BAIA Blog. Italics are mine.

“I work very, very, very slowly. More slowly than not just people but society as a whole expects. We live in a society that is really sped up. Everything keeps getting quicker and quicker and we all are getting shorter and shorter attention spans. There is an expectation to produce things quickly and move on. By contrast, my murals are almost like super slow-motion performance art, and it is meant to stand in opposition to this trend.

“When I start a mural, people expect to see me there for days, but it ends up being months. I definitely do put an unexpected amount of life energy into something that people, as you were saying, expect to be ephemeral. But it’s precisely when people in the street realize my commitment to a spot that they themselves start changing their attitude towards it, start slowing down too, start looking and appreciating more closely the very place I’m working in, which they share with me. In that moment of pause, that’s when the conversations get really interesting.”

And on her political agenda:

“Of course I take sides, but I try not to beat people over their head with a political position. I try to be a little slyer than that…. I fabricate Trojan horses with an appealing, even soothing first impact. My work is on the street, people see it everyday. I want to provide a respite, some pleasure at first impact. Which is also a way for me to draw more viewers in for a closer look, less of a self-selected audience.

“Then, once people are close and at ease, that’s when the rest of the message unfolds. And the way it unfolds is, I hope, not in a preachy, slogan-like way. Rather, I just lay out all the things I want you to consider, calmly and matter-of-factly, and allow you, the viewer, to wander from one thing to the next and make causal and comparative connections amongst things.”

There is lots of info about Mona Caron on the web and many images at her website.  Paige Bierma has made a film documentary about Ms. Caron titled “A Brush With the Tenderloin,” which hopefully will make the rounds someday.

Below  is a Leading@Google  video lecture titled “Mona Caron on Harnessing the Creative Power of Art to Build Social Networks.” Ms. Caron talks about her intentions and community interactions. Within it is a little sub-video of her street interactions focused on how she includes locals in her murals.

Large murals are hard to do justice to photographically but here are more images of Mona Caron’s work. These are details, but at her website you can see well done  edited photo-montages of entire murals. Please take a look at those larger images if you want  a real idea of what her murals look like. Also check out  her Facebook Artists Page,  where you can see what she is up to most recently. She has done at least one major mural since I was in San Francisco.

This site uses Akismet to reduce spam. Learn how your comment data is processed.

A warm winter day in Rockland, Maine. 8 x 12 in or 20 by 30 cm., Oil.#pleinairpainting# rocklandartcapitalofmaine #winterpainting
Finished up this still life. At first it was intended to just be a practice session before I started a bigger one of the subject, but It just kept on going on and on and on… 12 x 16“ or 30 x 40 cm, oil. #stilllifepainting #chineselanterns #stilllife
Better photo of one from the fall. 4 x 12“ or 10 x 30 cm., Oil.#pleinairpainting #adirondacks #uppersaranaclake
Throwback from Rome. This is on the Aventine hill. The structure on the right side of the painting is the site of the Aventine keyhole, which is a building that’s technically not Italy, but the territory of the Knights of Malta. There’s a little keyhole you can look through and see inside the structure, and also Saint peters Dome beyond it. A bit of a tourist site, you can search for it online. Very pleasant spot. #pleinairpainting #romeart #aventinekeyhole #aventinehill
Almost done with this still life. Some minor drawing things are obsessing me, so time to put it aside for a little while. #stilllifepainting #chineselanterns #obsessing
I have slaved forever on this tiny (6”x6”in. or 15x15 cm)little painting, which has been lying around my studio for two years now. It’s from a found photo, that I came upon randomly, and assumed that it was just an old unknown photo. Well it turns out it’s actually a really famous photo. It’s by @stephan.brigidi , and the subject is the late Francesca Woodman, an iconic photographer who died very young from suicide. And in fact for the next few days you can see a show of Mr. Brigidi’s work down in Boston, at the @robertkleingallery. Swipe for the poster from that show. #figurepainting #portraitpainting #francescawoodman